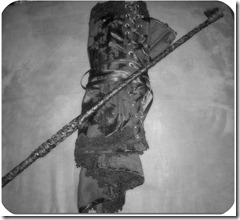 Last night, I suppose I was feeling pretty randy. While the dinner was in the oven, I went to our bedroom and changed into my black corset and hot pink lace boy shorts. We played a game, and ate dinner. All while I wore lingerie. After dinner I pulled out my whip, and gave it to the Hubs. He proceeded to slap me all over with it.

I bent fully over for him to get a great shot of my ass. He whipped my back, thighs and ass. Then told me to get onto the Zeppelin Lounger.

I got on my knees, towards one end. He tugged my corset up, and whipped my bare back. My panties were pulled off, and he slid into my wetness. He fucked me, while continuously whipping me. It hurt, but it was a thrill. I wanted to growl, and do all kinds of primal things. He told me to get onto my back. I spread my legs to greet him. My corset has hook and eye closures all down the front, I undid a few so he could push my breasts out. He then whipped my breasts, particularly the nipples, over and over as he drove into me. I’ve never felt such exquisite pain and pleasure at the same time. My nipples were stinging, and felt like they were on fire. But, it only spurred me on further.

I played with myself while he continued his onslaught, coming fairly fast. Wrapped up in the endorphin rush through my brain. I felt almost dizzy, and incoherent for a while.

The only limit I reached, was when he tried to put the crop across my mouth. It hurt. I had to tell him no on that one. I was surprised how far he took it, really reveling in fucking me hard, and showing his dominance. After, I had quite a few red marks, and today, I still feel a little sore in some spots. But— it was well worth it. I hope for a repeat performance soon.

**Sorry the Zeppelin Lounger pic sucks, it was the only one I could find…**

tearing my will down

You know how in movies they have those ten second flashback scenes? Normally with some sort of dramatic sound/music happening. Well- this is kindof what happens to me when I see a man I’m attracted to. Yesterday, I saw two. Both men that I have written my fantasies with them out in story form. Instead of past though, it’s a flash of scenes, of what is possible.

*Backstory: I live in a very small town, around 3,000 people. Therefore, I tend to see these men often or occasionally.

The first one I saw yesterday, I noticed a while back. Probably in early summer last year. He’s very tall, lean, with sharp features. The second I see him, my heart beats super fast and I can’t stop myself from staring. Yesterday, to make matters worse, he had on eyeglasses. Which, on the right guy, are one of my kryptonites. The scenes start flashing:

He turns to look at me, I’m close. He grabs me and lifts my legs around his waist…. My hands start to knock off the hat on his head. He clothes are torn away in urgency…

The other guy, I have entertained fantasies about for around the same amount of time. But I know this man, fairly well. He’s very charming, has a great smile, and one of the best asses I’ve ever seen on a man. Similar things happen to me with him, I may not get as excited, but tend to revert into my own mind. I wonder what he looks like with no clothes. What his fingers would feel like brushing my nipples. I normally see these scenes:

He kisses me, lips swollen, face red from his rough face… Lifts me onto the counter, no time to remove clothes, only necessities. My hands wrapped around his shoulders, inviting him further and further in…

This song always makes me think about it:

This story is at the request of http://woodynyou.wordpress.com/.

When I was 20 years old I dated a crazy guy. He was 27 I think, and very different than what I was used to. He had fair good looks, freckled skin, blonde hair, angular face, green eyes. We were ‘together’ for around 7 months. Depending on your definition of ‘together’. 😉 Aka, there were other men in my life, as I am sure there were other women in his. Around the time he and I got ‘together’, I also became very close to a woman I had worked with briefly. She was the same age as he was. It turned out, they had slept together before I had known either. She and I actually lived together briefly, but we spent a lot of time at his place.

One night, I was going to head to his house, and she wanted to go. The three of us got into his bed and put a movie on. One thing led to another of course, and he and I went at it. Clothes were discarded, mouths devoured. I got on my knees, and he proceeded to fuck me. She seemed pretty ambivalent to the situation, right next to us, watching the movie. I can’t remember exactly how it came about, but…

I was on my back, legs wrapped around his waist, the heels of my feet pressing into his lower back, urging him further and faster into me. He glanced at her, mid-thrust, and told her to suck on my tits.
**Back story: She had always loved my breasts, they were bigger and much fuller than hers.**
She immediately obliged. Licking my nipples and squeezing my tits with her whole hands. She kissed my mouth a few times. I’m pretty sure I reached out and grabbed hers also a couple of times.

This went on until the finish. She and I had a tendency to kiss while intoxicated on occasion, but that was as far as it ever went between us. And I will say, that was not the first time he and I had a sexual experience with another person. That story will be told another time. .. 😉